The Galveston marine biology trip was a big success despite the unusually high spring tide and a cold front that knocked 30 degrees off the thermometer in just a few hours.  Students spotted a number of dolphins while aboard the Seagull II, and got an up-close look at a ship made of concrete.  It did actually float at one point, but when the hull cracked, there was no way to repair it.  Now it sits in the shallow water off to the side of the Houston Shipping Channel, and is home to endangered birds.  Ironically, it represents a reversal of ecosystems; we took their homes, now they claimed one of ours.

The trawl net hauled in several animals our students had never seen alive, let alone held in their nervous hands.  We caught several sheepshead fish (they actually have nubby teeth that kind of look like human teeth), a dozen or so squid that readily blended into the hands of students as they tried to examine them more closely, a small sea robin (which can walk along the bottom using modified fin appendages), and a flounder–a fish that lays on its side and physically migrates one eye so that both eyes end up on the same side of their body.

Kayaking in the estuary was a bit rough the first day due to windy conditions, but on the second day, we became semi-pros as we navigated narrow channels in the salt marsh to get into the nesting sites of herons, egrets, and other marine birds.  Using seine nets, we captured comb jellies, shrimp, crabs, and a variety of juvenile fishes including red drum, silversides, and even yellowfin tuna.  The snails were out in high numbers grazing on the freshly sprouted stalks of cordgrass, but oysters and fiddler crabs were surprisingly hard to find this year.

With nesting season in progress for the Kemp’s Ridley sea turtles, our students learned first-hand how difficult it is for a turtle that is adapted for the sea to lumber out of the surf and up to the dunes, dig a hole with only their flippers, bury their eggs, and return to the sea. The students did just that—sort of. With backpacks full of sand and water, they raced twenty yards on their bellies using their outstretched arms and legs like flippers, dug holes with their feet, and buried chicken eggs in the sand.  We lost a lot of chicken eggs by the next day, but it was an exciting lesson on sea turtle reproduction.

We ended the trip at Kemah instead of the newly constructed Pleasure Pier, as it was closed due to high winds. We had a great time feeding stingrays and screaming our heads off on the wooden roller coaster and other thrilling rides on the boardwalk.  All in all, the students learned many things, enjoyed a lot of new experiences, ate some great food, and had a boat-load of fun. 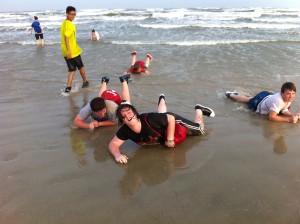